Michael Schindhelm has received the Herbert Quandt Media Award 2022 for his documentary “Revolution in Medicine – Project BioNTech” (literal German title translation : “A Vaccine at Lightspeed: The BioNTech Project“), broadcast on 30 October 2021 on ARTE. The award comes with a prize money of €20,000.

Laudatory speech by jury member Horst von Butlar:
“A stroke of luck for all of us”
When we look at the world and the economy these days, what we see above all is crisis, and not just one, but several crises that overlap and cluster into a ball of crisis, so that sometimes you don’t even know where crisis management ends and where it begins. The situation is a continuous stress test for many companies and we can be curious when we will use the word supply chains without the adjective “tense” again. When I think about the past few years, the time since March 2020, what companies have had to achieve, how they have had to reposition themselves, how they have been forced to make changes, then the whole thing can be summed up in one term: Adaptability. A lot of courage, a lot of innovation, an admirable build-up of resilience.
But out of all these entrepreneurial decisions and innovations, one stands out: it was the decision of the entrepreneurial couple Ugur Sahin and Özlem Tureci – the plan to put all their eggs in one basket within a few hours and days, at a very early stage, and to focus the power of the entire company on one project, the search for a vaccine for a global pandemic.
This decision will be taught in business schools one day. It was a decision that would be visible as a line item in the national accounts of Germany, the fourth largest economy in the world.
We know this story, at least in broad strokes, and we know the outcome, the outcome. So it is an art to deliver added value here once again, to find a story that is closer to it and deeper in it. Michael Schindhelm has succeeded in doing that. His film follows in the footsteps of this decision, it looks deeper and more closely behind the scenes – and the culture of Biontech.
On the one hand, in extensive, very authentic interviews – and all journalists know how short the time is that you can spend with both BioNTtech founders, because they want to be in the lab every minute and don’t want to talk to journalists – which again is a smart decision.
But the two have given Michael Schindhelm time. But not only the founders. One of the film’s strengths is that it talks to many more protagonists, managers, second- and third-tier researchers, rather unknown key figures – and also the Strüngmann investor twins. Who were certainly a stroke of luck for the company – and all of us.
And so he once again paints a comprehensive picture of this entrepreneurial gem. The author said he wanted to tell a hero’s story, and he succeeded – without staging the whole thing or laying it on too thick. The film is not cheesy or even dramatic, it simply gets very close to the protagonists once again. Given the abundance of portraits and interviews and books that have been written, this is a great achievement. As a result, any research in the archives on BioNTtech will not get around this film.
The interesting thing is that with the result of this decision, the company is financed through for the coming years to devote itself to the real mission: to use mRNA technology in cancer research. This will be a longer path, also more arduous – one would almost wish to accompany this path cinematically over a longer period of time!
But today it’s all about the “Speed of Light” project. Rarely has the jury been so quick to agree that this film is a winner because it achieves and fulfils what the Herbert Quandt Media Prize is all about.
We are pleased to award this cinematic and journalistic achievement with the Herbert Quandt Media Prize and 20,000 euros in prize money. Congratulations to Michel Schindhelm! 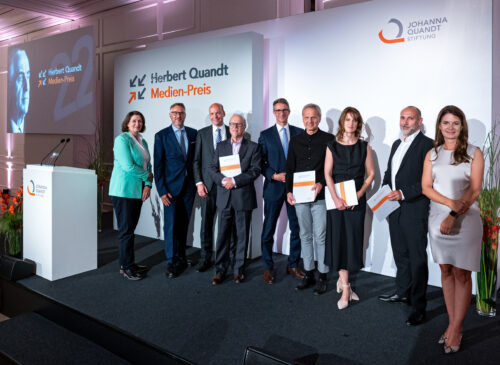