A Vaccine at the Speed of Light (Project Biontech), Documentary film, 52 min

A film by Michael Schindhelm

Watch in English (short version, available depending on geo-location): https://www.youtube.com/watch?app=desktop&v=VMZtG0O9sbU&feature=youtu.be

With the help of mRNA technology, BioNTech has developed the world’s first COVID-19 vaccine. These work by assisting the body in producing its own antigens against the virus – a medical mile-stone.

Since the beginning of the 21st century, scientists Uğur Şahin und Özlem Türeci have pursued the goal of creating individual-specific cancer treatments. The firm they have established, BioNTech, focuses heavily on revolutionary mRNA technology.

The “m” in mRNA means messenger, while RNA stands for ribonucleic acid. mRNA delivers information for antigen production directly to the cell which produces proteins. Afterwards, these cells present self-produced antigens on their outer shells and trigger a specific, desired immune response.

The idea of using mRNA technology for vaccines was first conceived in January 2020, after Şahin and Türeci read about a virus which had recently been identified in Wuhan, China. Within hours, BioNTech made the pivotal decision to launch its quest for a viable vaccine. The initial steps required much money and grit. The brothers Andreas and Thomas Strüngmann, founders of the pharmaceutical giant Hexal, were among its first financial backers.

BioNTech received hundreds of millions in funding and the development of the vaccine began. Although there were many unresolved questions in the beginning, their persistence ultimately paid off. A partnership with Pharma Giant Pfizer sped up the testing phase and Comirnaty was approved. With its efficacy now proven, millions around the world went on to be successfully vaccinated with it.

But what does the future hold for mRNA in cancer research? Can the technology possibly aid in the fight against Malaria? The documentary shows the broad-ranging effect this small startup company in Mainz, Germany, is now having on health – on a global scale.
In 2022 the film was awarded with the Herbert Quandt Media Award and the 3rd Award of the German Film Award for Economy.

“Film maker Michael Schindhelm has gained the opportunity to take a closer look at this revolutionary company.” – SRF & Arte

Written and directed by Michael Schindhelm

on behalf of ZDF and SRF

in cooperation with ARTE and DW 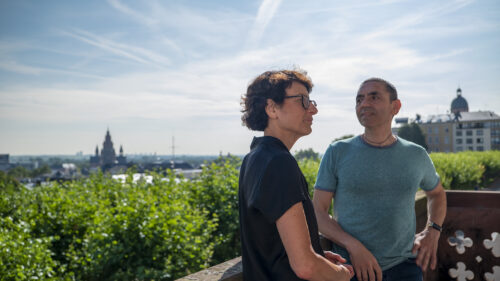